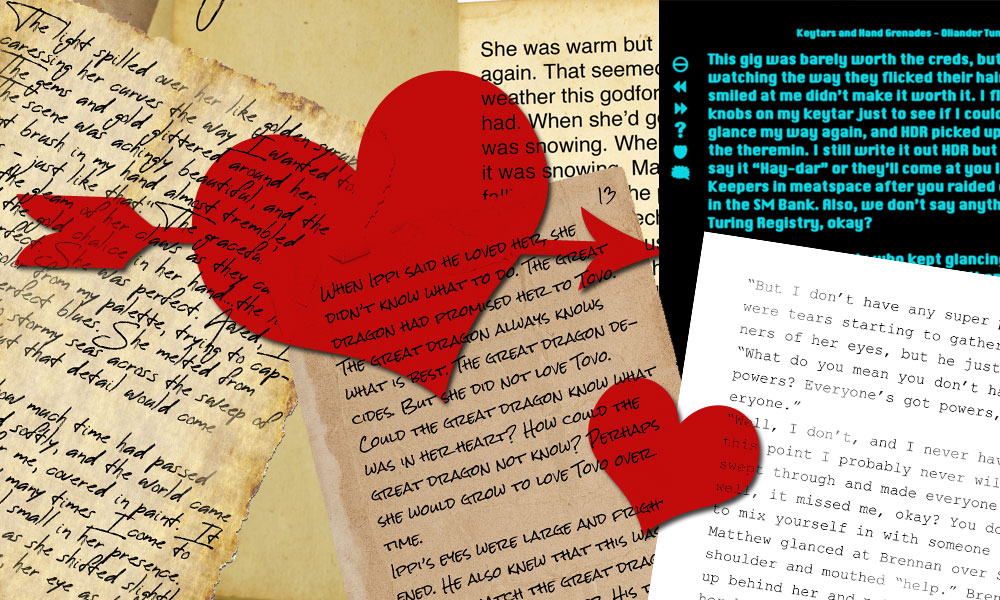 Happy Valentine’s Day! On this day, the internet (and the world) are an explosion of pink, red, and hearts, and you might be expecting another article either about romance in your games or specifically not romance in games; about celebrating with friends or gals or having some steamy time with your significant other, or how it stinks and commercialization, etc. etc. Well, I am here, bearing in hand a heart shaped box of gaming goodness, and it is none of those things.

What I have for you, on this Valentine’s day, are snippets of setting based romance.

When your players are searching the room that is probably an old abandoned barracks or maybe an NPC is out and they slipped in to toss the place, what is more interesting to find than the bits and pieces of life outside the eye of the game itself? Print them off, age them or burn them, write them out by hand – one of these stuffed under a goblin’s pillow or shredded in the dragon’s lair is all it takes to give tonight’s game a little special je ne c’est quoi. They are included here both in text form for you to distress yourself or as ready to go images for your table. Without further ado: the texts.

(A quick content warning: some of these snippets contain implied alcohol or drinking, nudity, and monster horniness.)

The light spilled over her like golden syrup, caressing her curves the way I wanted to. The gems and gold glittered around her. The scene was achingly beautiful, and the paint brush in my hand almost trembled.

“Yes – just like that.” The graceful curve of her neck, the gleam of her claws as they caressed the gold chalice in her hand…the lines were perfect. She was perfect. Awed, I dabbed color from my palette, trying to capture her perfect blues. She melted from pale skies to stormy seas across the sweep of each scale, but that detail would come later.

I don’t know how much time had passed when she rumbled softly, and the world came back into focus for me, covered in paint. It doesn’t matter how many times I come to her – I always feel small in her presence. A coin rang musically as she shifted slightly. She was looking at me, her eye as tall as my torso. I could fall into that gaze forever.

Ippi’s eyes were large and frightened. He also knew that this was not the match the great dragon had arranged for her. His tail was nervously brushing the cave floor.

“Ippi,” she gasped, “we would have to leave the lair! Are you as brave as Muurg? No. We must serve the great dragon.”

This gig was barely worth the creds, but hell if watching the way they flicked their hair when they smiled at me didn’t make it worth it. I flicked a few knobs on my keytar just to see if I could make them glance my way again, and HDR picked up my vibes on the theremin. I still write it out HDR but you gotta say it “Hay-dar” or they’ll come at you like the Keepers in meatspace after you raided every credit in the SM Bank.

Anyway, back to the eye candy who kept glancing my way at the bar. I was playing my heart out for them tonight, thinking about when the show was done, sauntering over, buying them a drink and knocking one back. I already know what the back alley looks like to the Clinky Vendor, but it would look ten times better with them in it. Nah. A hundred times. Those old bricks have nothing on the black blue feathered gleam of their hair.

We ended one song and I tore my eyes away long enough to give HDR a nodded count in for our finale when the EMP hit. One last glimpse of a smile and dark hair disappearing into that self same alley out the back, and the lights went, the decks went, everything went. I can’t believe my damn keytar got fried for a gig that won’t even cover the cost of replacing it.

Now I have to find them. 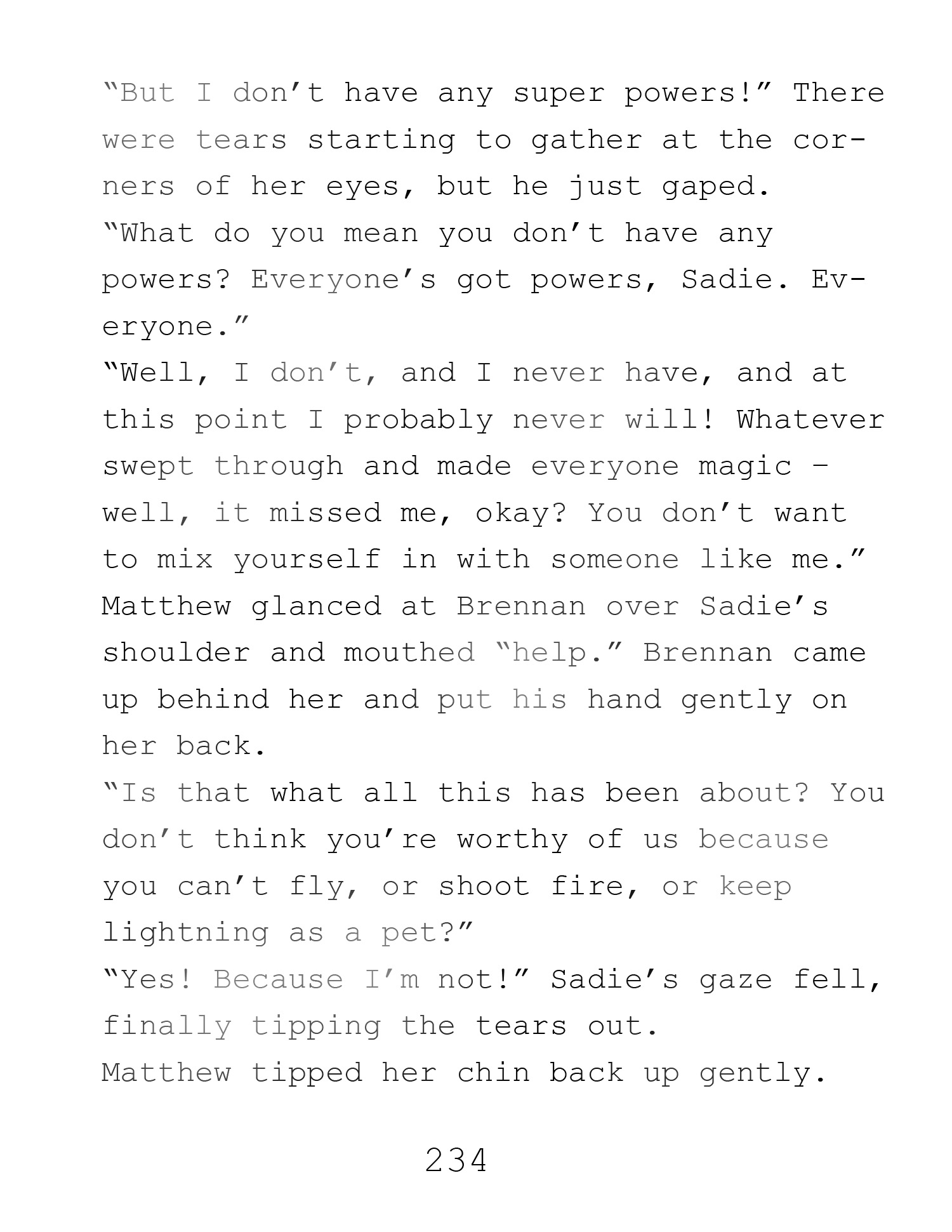 “But I don’t have any super powers!” There were tears starting to gather at the corners of her eyes, but he just gaped.

“What do you mean you don’t have any powers? Everyone’s got powers, Sadie. Everyone.”

“Well, I don’t, and I never have, and at this point I probably never will! Whatever swept through and made everyone magic – well, it missed me, okay? You don’t want to mix yourself in with someone like me.” Matthew glanced at Brennan over Sadie’s shoulder and mouthed “help.” Brennan came up behind her and put his hand gently on her back.

“Is that what all this has been about? You don’t think you’re worthy of us because you can’t fly, or shoot fire, or keep lightning as a pet?”

“Yes! Because I’m not!” Sadie’s gaze fell, finally tipping the tears out.

Matthew tipped her chin back up gently. “Why would we care about any of that?” 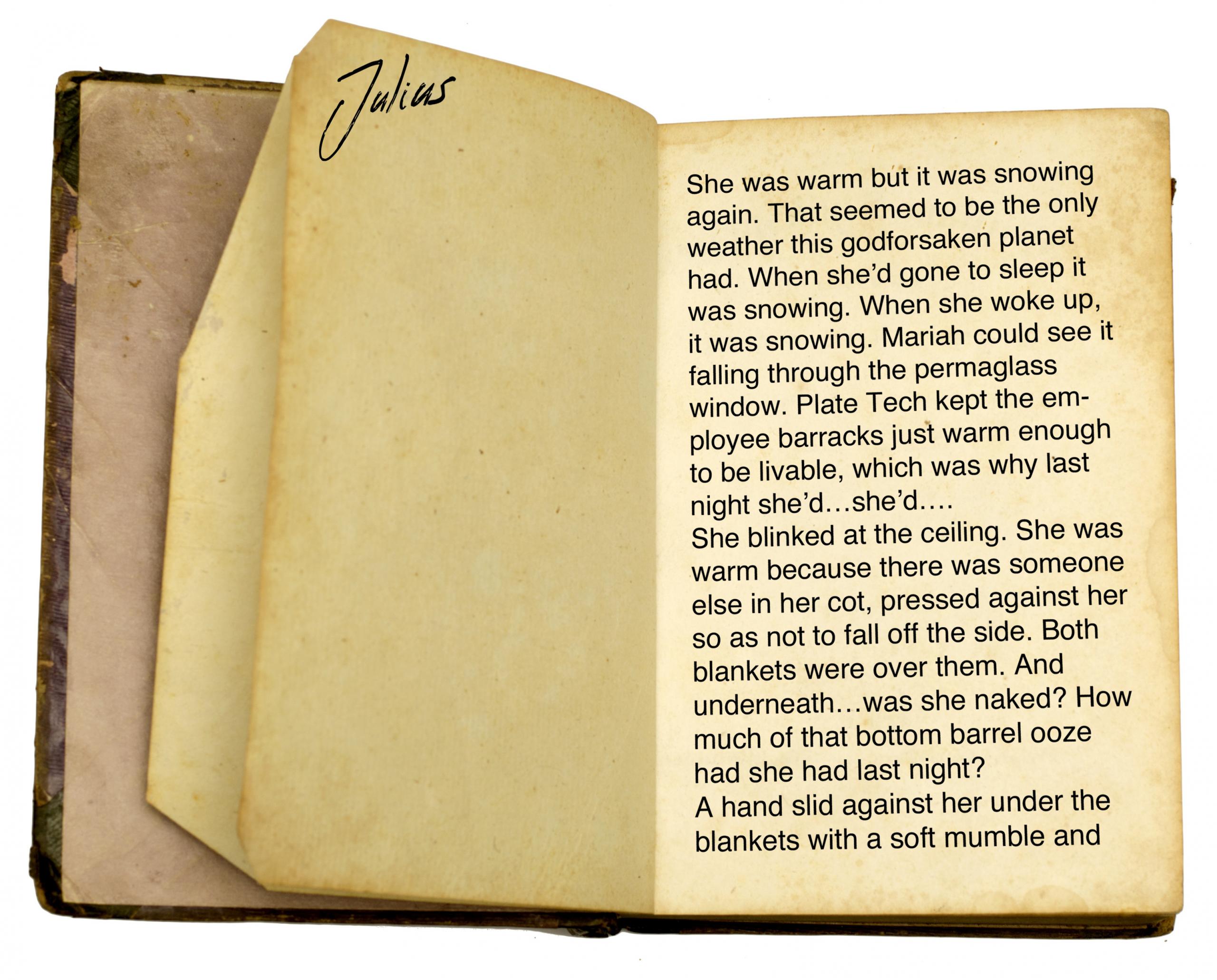 She was warm but it was snowing again. That seemed to be the only weather this godforsaken planet had. When she’d gone to sleep it was snowing. When she woke up, it was snowing. Mariah could see it falling through the permaglass window. Plate Tech kept the employee barracks just warm enough to be livable, which was why last night she’d…she’d….

She blinked at the ceiling. She was warm because there was someone else in her cot, pressed against her so as not to fall off the side. Both blankets were over them. And underneath…was she naked? How much of that bottom barrel ooze had she had last night?

Skin shifted against her under the covers with a soft mumble and she froze.

Don’t tease me about my terrible romances — what trashy novel pages would you leave strewn through your dungeon?