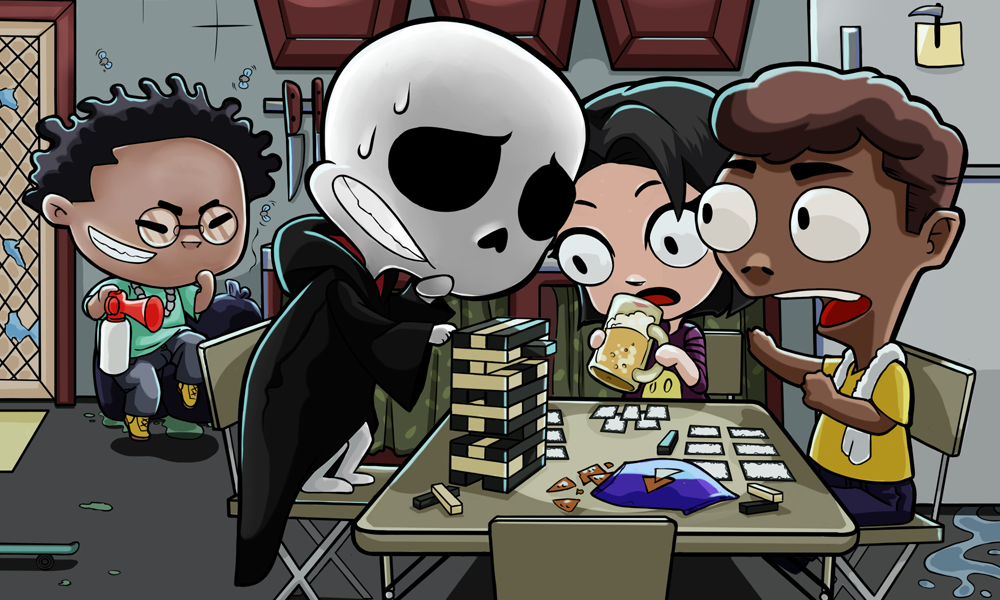 How do you run better games?

Delegating to the Dice

In the time honored tradition of tabletop role-playing games, the outcomes of tension and risk have been delegated to the dice. You say, “What do you do?” When the player responds, you say, “Give me a roll!” Anything so vital to the story that its success weighs in the balance requires a little luck…a randomizer. Why? Because we play unwinnable games to see what happens—to see where the story goes. To know, just how the story ends, makes it routine, predictable, less stimulating. The anticipation of not knowing is a reason we play, a reason we run games as well. We want to know who wins, who loses, and at what cost. We let the dice roll and see how they fall.

As a GM you can help players immerse themselves into characters faster by invoking a variety of the basics senses. The five senses are how we perceive our world. The more senses you can use to deliver description, the better you can connect with your players on an innate human level. Words often deliver unintended mixed messages. Help your players better understand their imaginary surroundings by speaking THEIR language, the language of how they perceive their world.

What better way, than with a better tool? 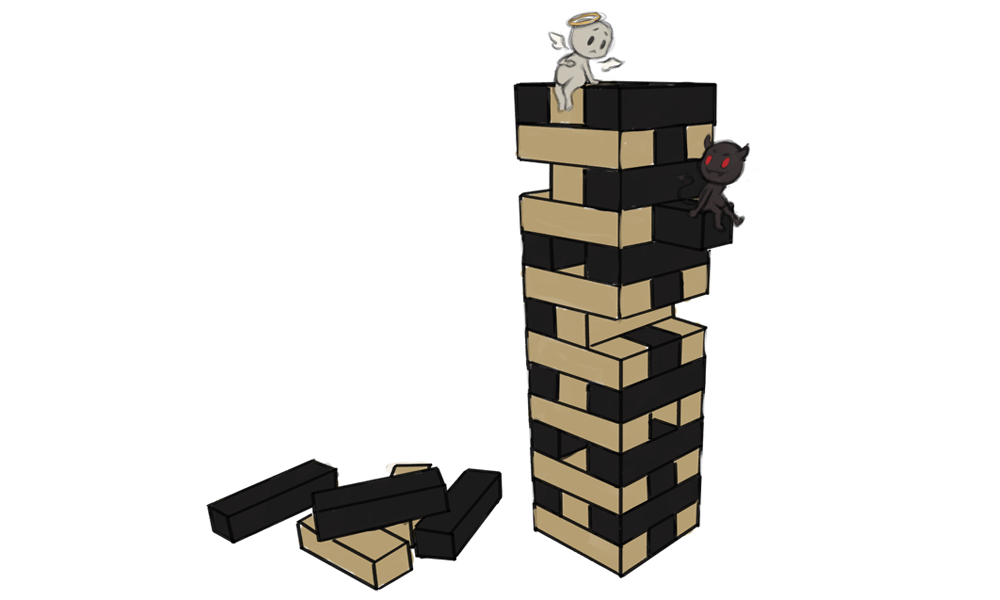 Rest in Pieces’ Death Spiral of Infinite Influence! Ok, so it is just a two-color block tower to you….womp womp.

The Building Blocks of RPGs

Do we ask too much of the dice? I mean, look at the rise of the Jenga [2] tower in RPGs. Dread’s contribution is in its simplicity. It replaced dice as a randomizer for success with a tactile tool that also visually ramps up the tension. Like a clock at the center of the table, it paces player expectations in a way that the GM can anticipate. It is evocative! If you’ve considered holding your breath while pulling a block from a teetering block tower, then you know what I mean. Each pull can feel a little like rolling a natural 20—but over and over again! So, somebody tell me why we’re still rolling dice?

What if you wanted to take the numbers out of your role-playing games to focus the players on filling the shoes of their character, the narrative, and the rising tension? You could make an argument that a Block Tower RPG is easier to play and easier to teach, further opening up the hobby to welcome more players. That is the story behind Dread’s conception, you probably know it as THE Jenga RPG. Dread popularized the use of a Jenga tower in place of dice. And in one fell swoop, the tool, not the GM, checked off all of my points of interest.

I write this as a game designer that has been tinkering at the use of a Jenga tower in RPGs for the past couple of years. Cards are growing into the mechanics of tabletop RPGs more and more everyday. The Block Tower RPG has also been evolving as the RPG audience broadens and more blending within the many different types of tabletop games occur. As a GM, it may be time to revisit the tools we use at the table, or at least, to ask ourselves, “Why not a Block Tower?” 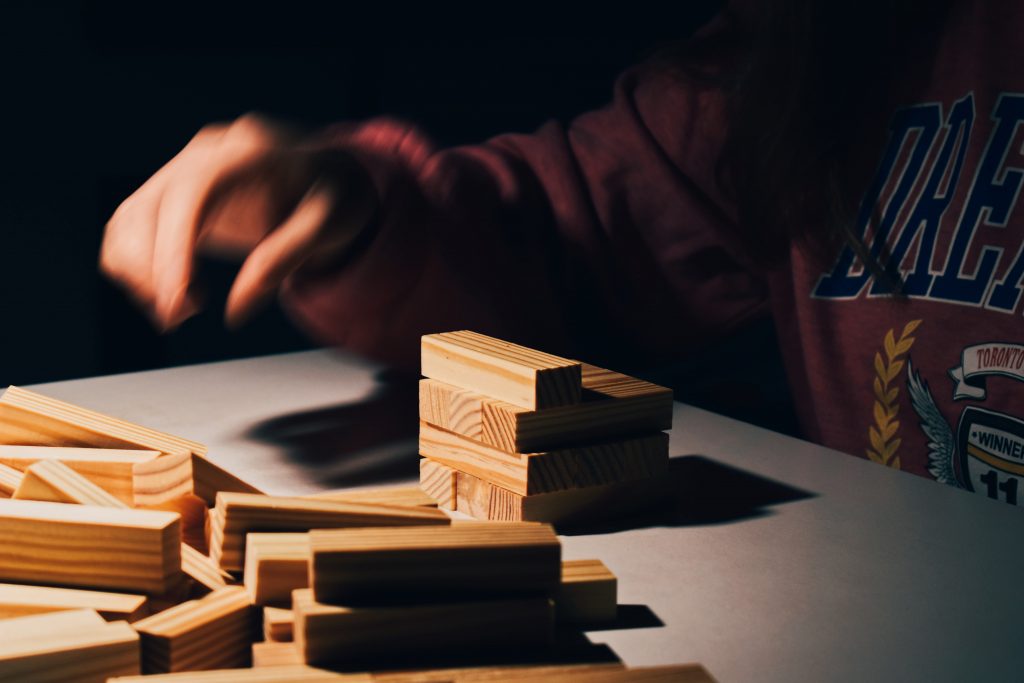 There is a finality to the tower falling and a bit of lazy desire to leave it in ruins. Could there be a better representation of a messy death or a forbidden love? The game mechanic tempts you with the forbidden fruit of success, all the while, you know that each pull inevitably draws you closer and closer to the end. Each collapse of the tower is dramatic, but let’s not kid ourselves, it’s a chore to put a Jenga tower back together. In a game with the potential for multiple collapses, each reconstruction is a break in the tension, and likely, the narrative. This is great if you’ve matched the inevitable crash to coincide with a story beat worthy of reflection or pause (Great Sacrifice, Character Death, Tragedy, Session’s End). Otherwise, each collapse is an increasingly tiresome break in the action. For this reason, you may find the use of a block tower better for one shots than prolonged play.

Another interesting benefit of the Block Tower RPG is the advancement of character creation as a questionnaire. Just as the block tower reduces the need for math that generally dominates traditional RPG gameplay, it also reduces the amount of character creation know-how each player needs to make their character. We can ask questions about who a character is and assign value based on that description and not the summary of its attribute scores. This further lowers the bar for learning how to play and getting started with tabletop role-playing games.

Since 2005, Dread has inspired many designers (such as myself) to delve into the block tower design space. I’m reading one right now by the great Ryan Boelter of the Character Creation Podcast! [8] I’ve read stories of GMs using the block tower for dream sequences in D&D or as an alternate rule system for their campaign’s big Halloween game session.

Has it inspired you? 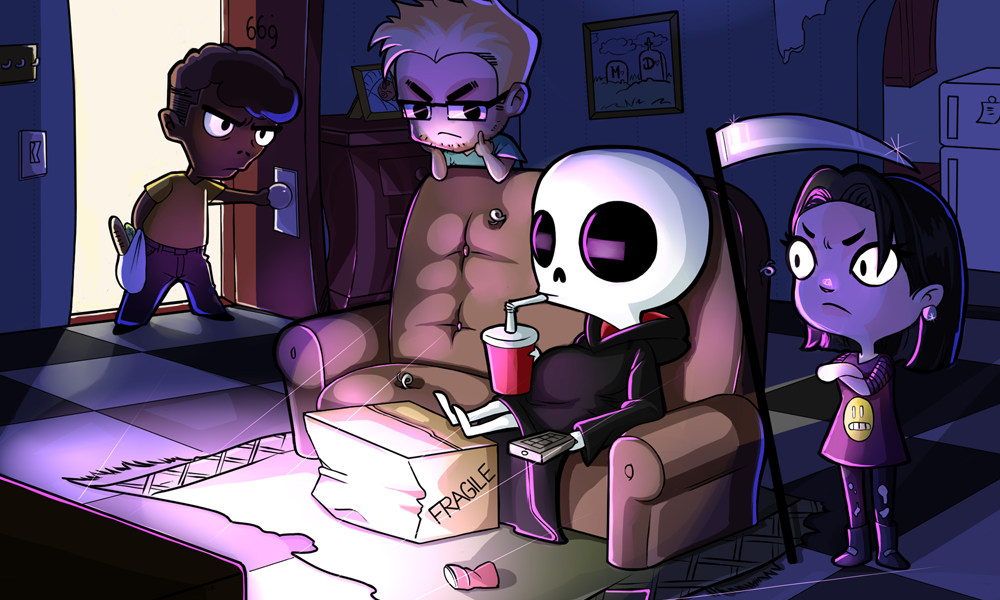 What has Dread inspired in your gaming?

How have you used a block tower in RPGs?