A Believable Lie about Steampunk 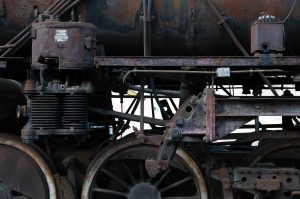 Steampunk is all the rage these days, but have you ever considered the etymology of the word? The term Steampunk is clearly derived from Cyberpunk,Â with the majorÂ difference being one features ubiquitous steam tech, the otherÂ Â ubiquitous cyber tech.Â  Aside from that, the titles say they’re not supposed to be all that different. Which is to say that they share the “punk” aspect, which carries the entire flavor of the Cyberpunk genre: the dystopian, filthy cities, the squalor for the common man, the Â abject poverty and overcrowdingÂ despite technology capable of bringing in a new golden age.Â Even more than the cyber, the punk is what Cyberpunk is all about, and yet despite being as integral a part of Steampunk, you rarely see it there.Â So where has it gone? Why do we ignore the gritty underbelly of Steampunk while embracing the same culture in cyberpunk?

Well, mainly it’s because the above connection, which certainly seems to make sense, isn’t true. Steampunk is a tongue in cheek name given to the genre by one ofÂ a crop of 1980sÂ authors precisely because it wasn’t punk at all, in contrast to the cyberpunk movement which was a rising star at the time, in the same fashion as you calling your tallest friend “shorty” and your shortest friend “big guy”. Of course, the joke isn’t quite as obvious 30 years later, but that’s just the way history works sometimes isn’t it?Â  (At least, this is correct as far as one can tell from wikipedia, but for all I really know, I was right the first time, so anyone out there who claims I’m wrong the first time, second time or both, feel free to educate me)

But… admit it. There for a minute, I had you hooked. What? Dystopian Steampunk? With powerful industrialists and jaded high society, the lower class forced to work in sweatshop like conditions for pennies a day, the PCs as steam-powered rebels and freedom fighters, striving to overthrow the yoke of opression or Shadowrun-esque fixit men quashing rebellion and committing acts of industrial sabotage?Â  That’s fully awesome stuff.

And that’s the point of today’s article: all it takes is a little shift in genre to makeÂ it fresh and new again. You don’t have to completely change genre, all you have to change is a componentÂ of genre.Â  For the purpose of this article, we’ll consider the following things as components of genre:

So by taking your usual genre and switching up one of these components, even for a few sessions, you can add new life to your campaign.Â  Let’s look at a few examples grabbed at random from Eureka’s master sub-genre list:

By altering a component of your genre permenently or for a few sessions, you can add some new life or a t least a new perspective to your game without making many fundamental changes, so go out and give it a try.

9 Responses to A Believable Lie about Steampunk