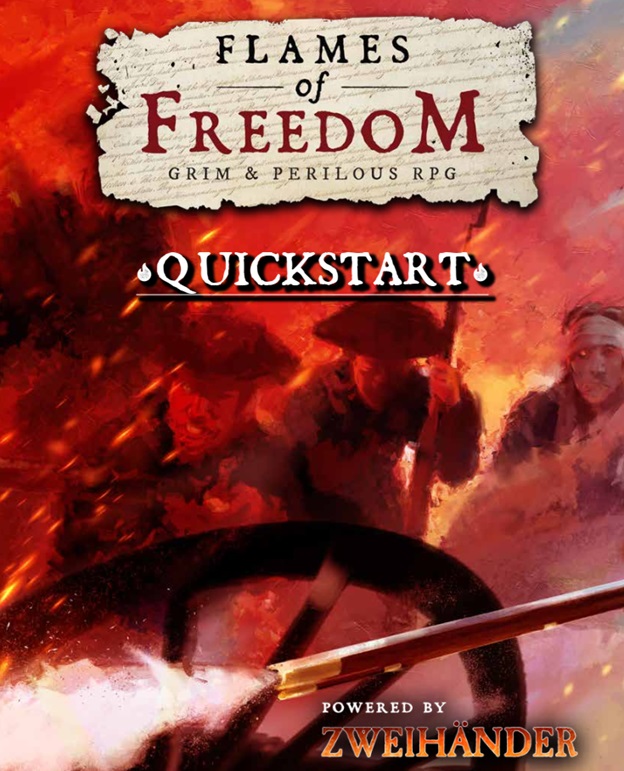 There is a lot going on in the RPG Kickstarter space this month. Today I’m going to take a look at another game currently being funded on Kickstarter. This time we’re going to look at Flames of Freedom, a “Grim and Perilous” rpg, meaning that it uses the same core resolution engine used in Zweihander.

Flames of Freedom is set during the Revolutionary War, but the war may not be your primary concern. Turns out, there are sorcerers, secret societies, and supernatural monsters that manipulate current events or prey on those that are embroiled in the pressing matters of the time. Your characters are investigating and pushing back against the dark.

What Are You Looking At?

The preview is based on the quickstart rules that you can find here:

The quickstart is about 60 pages long. This includes a credits page, a two-page table of contents, a one-page ad for the final product, three pages of standees/cutouts, and fourteen pages of pregenerated character material. At two pages per character, that means you get seven sample characters to use.

The adventure included, which is intended to run about three hours, is about nine pages in length. The rest of the material is setting material or game mechanics, as well as a healthy amount of space dedicated to the expectations of the game.

How Do I Do Things?

The game uses a system of resolution that is pretty standard for many d100 games at this point. If you roll under your rating, you succeed. If you roll over, you fail to accomplish your goal. There are a few unique twists to this resolution system, however.

Flipping to succeed/flipping to fail are mechanics used to make it more likely for you to succeed or fail under favorable or detrimental circumstances. If one of these applies, you reverse the 10s and the 1s on your dice result toward whatever result applies.

There is also a meta-currency that works in a manner not unlike Dark Side/Light Side points in Fantasy Flight’s Star Wars games. Some of the currency is available to both players and the GM, and when it is used, it is moved to the other pool. Using this currency allows you to reroll dice, roll an extra d6 for some applications, gain an extra action point for later use, or add a new detail to the scene at hand.

There are various derived stats to do things like determine how many people your actions can affect, determine how quickly you can act in structured time, add damage to your attacks, or establish your peril and wound thresholds.

What Are Peril and Wound Thresholds?

Instead of having a discrete number of hit points our wound points, or having a set sanity or fatigue score, characters have thresholds. If an action breaks the threshold, the character takes the first step of the conditions on that track. If the amount over the threshold is double, triple, etc., the character moves multiple steps on that condition track.

What Are These Action Point Things You Speak Of?

In structured time, a character has three action points to spend. They can be spent on attacking, moving, reloading weapons, aiming, etc. There are special attack options that might take extra action points (like charging), and there are healing practices that also have an AP cost.

While there are many activities that cost an action point that might be nice to add to a standard attack, for example, there is a good reason to save an action point. If your character is attacked, and you still have an action point, you can actively try to avoid the attack. Otherwise, it’s all resolved by the attacker’s skill test. 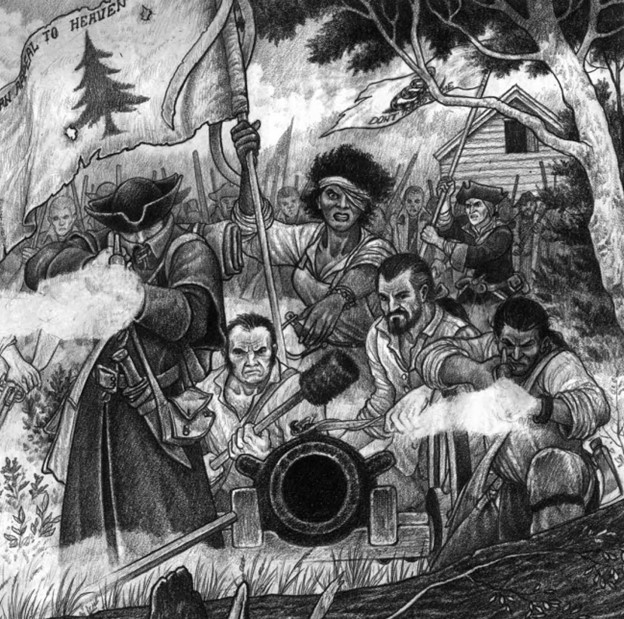 But What About the Setting?

The assumption is that your character knows the supernatural is a threat. In all the chaos of the Revolutionary War, there are dangerous monsters and secret societies taking advantage of the chaos to shape the world in their own image, or to mask their ability to hunt prey.

There is a lot of time taken to describe the different styles of protagonists found in the setting, and a lot of effort made to make sure those protagonists are diverse and non-exploitative. One of the ways this is done is by not only stating that these protagonists exist, but through a series of example paragraphs from the perspective of many different characters. These paragraphs lay out the history of the character, who they are, and why they are fighting against the supernatural.

There are also specific sidebars about Indigenous, Black, and Women characters, with a further promise that the means of portraying these characters with sensitivity and respect will be further explored in the core rulebook. Between the time taken to provide additional perspectives, the sidebars, the artwork, and the sample characters, I feel like the desire to make this a diverse and welcoming setting is more than a surface level attempt.

In addition to spending a lot of time on inclusivity, there is also some discussion in the quickstart about how the darkness of the setting, both as a horror setting and as a wartime setting, can be violent and disturbing. There is a reference to upcoming safety tools designed expressly for the game, and a statement that the game is intended to be something that everyone at the table can enjoy, and stresses the importance of consent at the table.

What About the Adventure?

The adventure is tied to an adventure that will be published in the core game and assumes a patron that is aiding the players in their opposition to the supernatural. The characters are to meet a special contact, but unfortunately that contact has become embroiled in the plot of a supernatural creature.

People have gone missing, and a person that has manifested a supernatural urge to feed on others is justifying their curse by assigning themselves a holy purpose. The player characters will be trying to find missing victims, clear the name of a wrongly accused man, and finally, stop the supernatural threat that has been victimizing the area.

Knowing this scenario is intended to play out in about three hours, I will say it does feel like it will resolve quickly. There is some quick initial roleplaying, a few slightly different paths based on investigation, and then a confrontation that may be more or less of a surprise based on previous decisions made.

There is a lot of time taken to describe the different styles of protagonists found in the setting, and a lot of effort made to make sure those protagonists are diverse and non-exploitative.

It’s probably no surprise that the core Zweihander book evokes a very strong Old World Warhammer feel, since it was reversed engineered to provide an IP-free version of that kind of gritty fantasy. What surprised me a little in reading through these rules is how much I was getting a more hybridized Warhammer/Call of Cthulhu vibe. The rules don’t feel drastically different, but the framing of the rules makes it feel as if the peril track is going to be playing a big part in how investigations play out.

I love how much time the quickstart has spent exploring the perspectives of different protagonists. While it has become more standard to state that you can play as a diverse range of characters, it still isn’t standard to explore what that actually looks like. I appreciate that even in the quickstart, this product is pushing in that direction.

While some of the text indicates that characters should only be getting into combat as a last resort, the amount of effort spent on combat rules makes that feel like it’s more accurate to say that characters should be prepared to be injured and killed if they get into a fight. The quickstart definitely nods towards being more able to engage the supernatural in a fight than in Call of Cthulhu, but still be very likely to pay for that kind of resolution.

I really like the action point economy tied to the combat system. In both Call of Cthulhu and Fantasy Flight’s Warhammer 40000 RPGs, I know there were many times when people were confused about when a dodge or a parry would be allowed, and if your character had to do anything to set that up. I also like that it provides some clear answers on what it takes to set up a called shot, provide first aid, or reload a weapon, in a currency defined by the game.

I know that core Zweihander has extensive, gruesome critical charts for wounds, and that is entirely in keeping with its source inspirations, and I know that a gritty Revolutionary War setting is going to see some gruesome rules as well, but for a game that may be as much about investigation, I kind of hope there is an optional, non-chart heavy resolution to Moderate, Serious, or Grievous Injuries in the final game. Depending on the game, the detailed chart could really shift the focus from “investigate the supernatural” to “wartime epic with creepy stuff on the side,” and if that’s not the game you are going for, it would be nice to have an alternative.

While there is a safety discussion in the book itself, and a reference to active safety tools designed for the game, I think the sample adventure could have used a few more content warnings. Sometimes I think we forget that the GM is also someone that may need to watch out for their own emotional well-being, and the adventure includes child endangerment and death as well as cannibalism.

I am really intrigued by this game, and looking forward to seeing the final version of the game rules. I like the slightly more action oriented supernatural investigation hook, and I appreciate the underlying creepy conspiracy angle to the setting. I really want to get a look at the expanded information on inclusion and portrayal of different characters.