IN THEORY: Approaches to Social Interactions 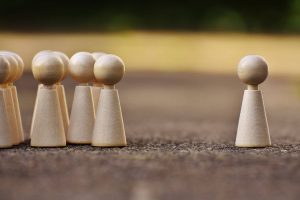 Social interactions are what separate roleplaying games (rpg’s) from most other types of games. For example, how often do you talk in character in Monopoly or checkers? However, social interactions often have more gray area than other skill tests. For example, it’s easy to determine the results of a CLIMB roll. Either you make it, or you fall and take some damage. But even if you make your CHARISMA roll, that doesn’t mean that a non-player character (NPC) will tell you everything or obey your every command. The gamemaster (GM) has to make some decisions.

In this article, we’ll look at three approaches to resolving social interactions. We’ll look at their advantages and concerns without advocating for any one approach over the others.

DICE ALONE
In this approach, players may still talk a bit, but dice rolls ultimately determine the final outcome. If you need to know how much to tell players, consider a degree of success or failure chart. This method has several things to recommend it. Not everyone is comfortable with or skilled at roleplaying. This method allows those players to still have a role in negotiations and information gathering. It is also more generally consistent with how combat and physical challenges are resolved. Lastly, it prevents arguments. You either made the roll or you didn’t.

On the down side, this method does not encourage in-character conversation. It doesn’t matter whether you craft a clever story to fool the town guard, or simply say “I talk to him.” Some groups may be fine with that, but others may want more robust social encounters. With this method, there’s no reason to develop your character’s social approaches.

DICE PLUS BONUS
In this approach, the GM will give some mechanical bonus for good roleplaying. For example, she might give a +2 to your CHARISMA roll, or have the NPC give up more information than originally planned. This method encourages roleplaying while still allowing the dice to have some say. It can be a good compromise between DICE ALONE and ALL ROLEPLAYING.

One concern with this approach is that shy players may get sidelined. Also, the task resolution may be inconsistent with combat and other dice rolls. Usually you don’t get a bonus for well-described blows in combat (though nothing says you can’t do that as well). Lastly, there will be some GM fiat involved, as every scene will play out differently.

ALL ROLEPLAYING
In this approach, you don’t roll dice at all. If you give the stormtrooper a convincing story, he may let you into the Imperial information vault. Player skill is more important than game mechanics. This method may be most appropriate with friendly NPC’s. Why roll dice when talking to your patron wizard or commanding officer? They plan on helping you anyway. Also, you may not want to roll for every little encounter. The town blacksmith is more concerned with your money than your charisma.

This method doesn’t encourage players to invest in social skill points. Why dump points into NEGOTIATE when the GM won’t call for that roll anyway? As with DICE PLUS BONUS, quiet players may get sidelined. Also, there can be accusations of unfairness. A player may feel that they roleplayed an encounter exceptionally well and weren’t adequately rewarded.

CONCLUDING THOUGHTS
This article couldn’t cover EVERY possible social game mechanic. There are certainly games that have rules for social encounters that eliminate or minimize the need for GM interpretation. In most games, however, there will be some need for GM input in social situations. It’s the part of the hobby that most resembles improvisational acting, and the game is richer for it.

How about you? What approach do you use most often? What ideas did I miss in this article? Let us know below.

4 Responses to IN THEORY: Approaches to Social Interactions