3 Zany Robots for Your Game

Here are some misfit robots for your game. They span several genres, but all are fun and colorful and a little silly.

Lacking hardware that could handle the complex processing required to run a robot, the designers of SP1kE used an organic stand in; a preserved brain. SP1kE is the first prototype of a failed line using a human brain. Discontinued due to design failures and the difficulty in securing raw materials fresh enough to be usable, the SP1kE line was replaced by the SP0T line which made use of dog brains. However, this situation was never explained to SP1kE. Coupled with the inherent damage to stored memories caused by brain transplant and preservation, SP1kE is certain he’s a dog, just like the SP0T line. However, he displays a remarkable adaptability and command of higher concepts, such as language, than are easily attributed to a dog. He stubbornly refuses to believe any alternative is possible. After all, he watched production of the SP0T line with his own visual sensors. Play SP1kE like an enthusiastic man-child pretending to be a dog, but not really grasping concepts like “Dogs can’t talk and don’t understand how robotics work.” 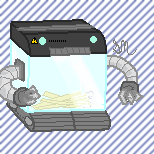 If you ever wondered what happens when you feed a magical tome into an industrial shedder; the shredder comes to life, grows limbs and starts seeking out other magical documents to fuel itself with. Shreddy is a pretty simple bot. He wants to settle down in a low level job shredding documents and gabbing in the break room all day long, but is forced nights and weekends to go on adventures to obtain more magical scrolls and books to fuel himself with. Ultimately he’d like to get his clamps on an artifact level text to fuel himself indefinitely so he can retire to the life of an office slacker. Of course to shred an artifact level book, he’ll probably need artifact level grinders first, and to hold them in he’ll probably need some mounts made from some mystical metal. It’s all a major hassle really. Play Shreddy like an unmotivated drone exasperated with the effort of this whole adventuring thing.

Refurb Medbot 53B is a patched and jury-rigged standard issue medical assistant robot from a few decades ago, fully qualified to administer last generation’s first aid, over the counter medication, and simple diagnoses. Most of the time she is cool and professional, dispensing care quickly, effectively and with a cheery bedside manner. However, some of her numerous patches come from military bots and a holodisc player with a library of action sims. In stressful situations, especially when one of her patients is in danger, Medbot “flips out”, starts yelling one liners from action sims and opens a can of woop-ass on the threat. Don’t let Medbot 53B overshadow the combat capabilities of your combat oriented players, but she should be a competent combatant. Alternately she can be a glass cannon who is knocked out of her enraged state after a few hits, or completely incompetent but fun comic relief (or all three depending on which sim she’s currently channeling). Play Medbot as a perky, pleasant nurse, and then have fun yelling one liners from popular action movies in a robotic falsetto when she goes berserk.

2 Responses to 3 Zany Robots for Your Game