Back when I wrote about using 100 Blank White Cards asÂ  tool for world creation, Martin asked for an example. Since Martin is the boss here at the stew, that means you get a follow-up article.Â  With 30 of our previously created cards, and another 30 blanks, my wife and I set out to create a setting for a fantasy game.

With our first two cards, we were off to a good start.Â  The island on the back of a whale is a unique, fun location card. It implies a greater area of an ocean or sea, and it’s apparently inhabited by a tribe of exceptionally sneaky goblins. 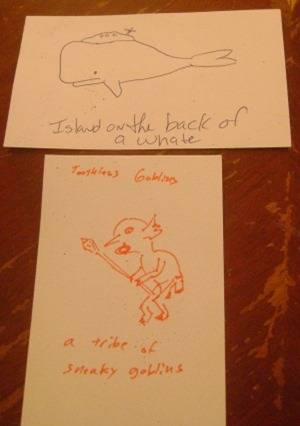 After a few more turns our world has a garden with a magic apple, a chasm full of bats, a giant mushroom swamp, a hole in the sky inhabited by swarms of man-eating magic birds and a strange sea where not even the laws of magic apply. (click for a larger view) 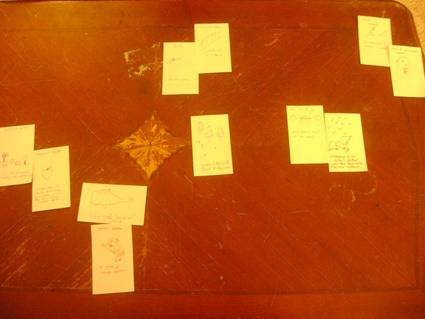 There are two things of note in the setup at this point:

First, the position in which we’ve laid out the cards indicates the general layout of the areas in the world.Â  Thus, for example, the garden with the magic apple and the mushroom swamp are on opposite shores of the sea with Whale Island.Â  When you finalize the map and sketch it out, you can shift or firm up these relationships as you see fit.

Second, The Sea of madness includes the detail “Zones of wild magic”.Â  When I made this card, I made it as a world detail card, intending for it to apply to the world as a whole, but when my wife played it, she chose to make it a feature of just the sea of madness. This is perfectly valid, and is one of the best parts of 1KBWC. By allowing everyone to riff off of and use each other’s ideas, you inspire each other, include everyone’s ideas, and have access to more ideas than your own.

We also have several cards set aside in our world detail track, an area for details that apply to the whole world, including the demonic origin of magic, a historical plague with a linked artifact, and a mad golem that wanders the world. Similar to the zones of wild magic which was intended as a world detail but ended up as a location detail, the Copper Man was originally intended as a location detail, but ended up being a world detail (described as “an old married couple who can’t decide where exactly they’re going in a car that never runs out of gas”). 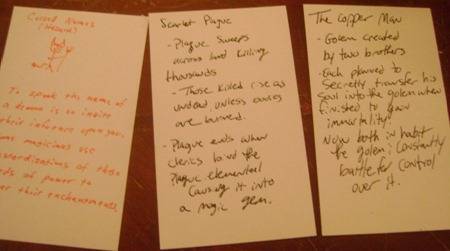 At the end of the session, most of our locations have been expanded:

Whale Island is the resting place of a forgotten petrified god: 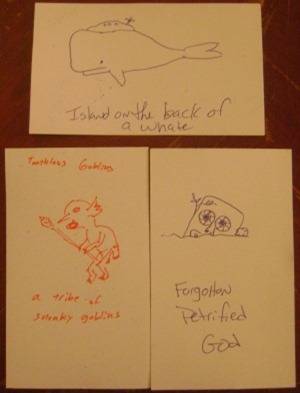 The hole in the sky is home to a benevolent thunder god: 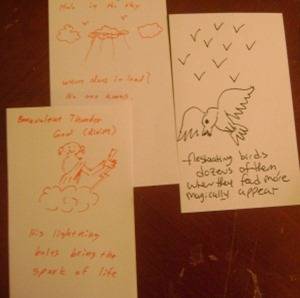 The garden is now home to an evil nymph and celestial tree sloths: 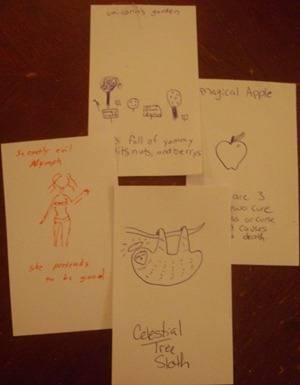 The great chasm is home to several sub locations and a race of dwarves: 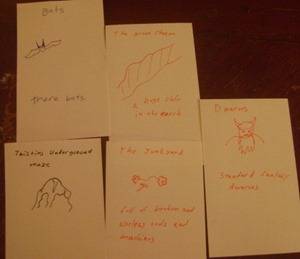 New locations have been added, such as the Red desert, the ruins of a great civilization, with several notable features: the sands of time, and the Living mountain, which itself is home to tiny flying yetis. 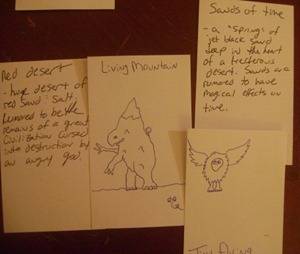 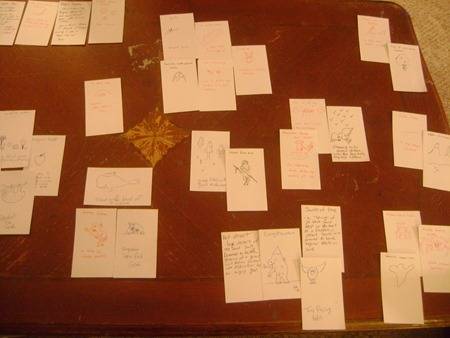 and our finalized world detail track included some more cards, includingÂ  more details on the artifact mentioned earlier and a completely unrelated plague (or is it…?) that’s an example of more than one player having the same idea.

In retrospect re-using cards from the last time we ran a test of world gen using 1KBWC led to similar combinations of cards (for example, the garden is fairly unchanged from the previous game, and the Living Mountain had tiny flying yetis both times). That makes re-using cards a bit of a tradeoff. It saves time at the expense of originality. If you don’t mind some locations similar from game to game, that’s not a problem.Â  If you’d rather use all new cards but don’t want the chore of making 60 cards during a single game, consider explaining the rules to your group ahead of time and giving them a week to come up with 10-15 cards apiece, or just creating a decent sized stack before play yourself.

Aside from these few concerns, I heartily endorse 1KBWC as a world generation method, and I hope this example helps illustrate this fun tool for other GMs.